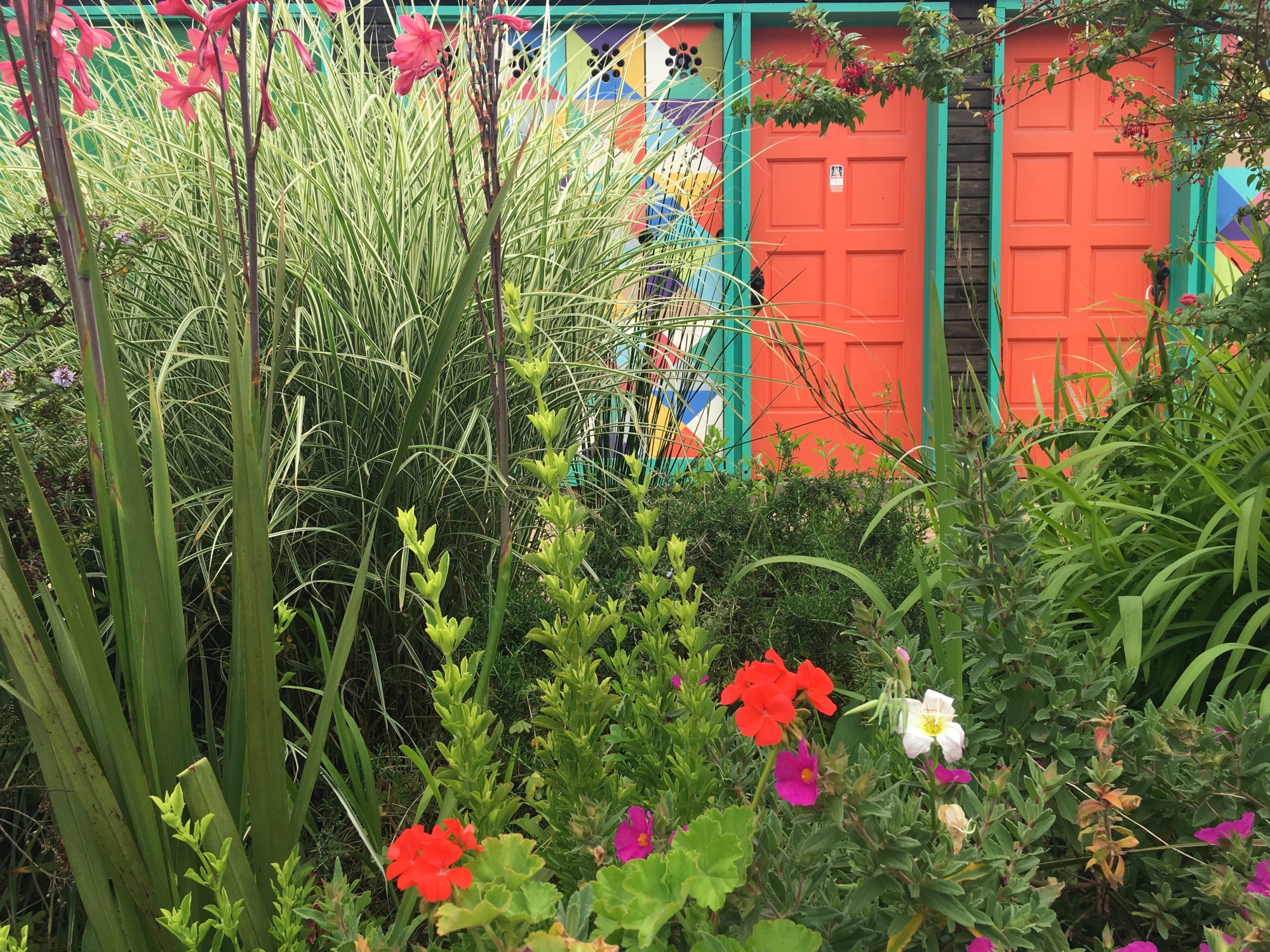 Buying a one way ticket to South America added a bit of flexibility for my brother and I, but also provided us with some intense days of last minute planning and searching for flights. What we hadn’t taken into account was that flights between neighboring countries in America del Sur were actually quite expensive. We had intended to make it to Buenos Aires, Argentina but flights out of Cusco were marked at nearly $800USD…one way. Which was over 3 times what we paid to even get down there. Realizing we needed to find an alternate plan we spent hours scouring airlines and bus companies trying to find a winning combination and we finally booked a flight to Chile. I had no idea what to expect there, but it was a new country, a new currency, and a new cuisine, and I was open to it all.

This little detour landed us in Chile’s capital and largest city, Santiago, nestled between the Andes and the Chilean coastline. We chose to stay in the Barrio Italia at a hostel called Surfista, with hopes that the hosts might have some advice on the best places to find some waves. The ‘hostel’ however was more like a converted home. The dining room was used as a mess hall, and each of the rooms, including the back guest house were converted into 6 bed dorms. There was a large guard dog that ruled the roost as he greeted guests at the back courtyard. It was a different style accommodation for us for sure, but felt more homelike, and was in a slower part of a town. The suburban streets were quiet and it was just a short walk to the green belt park. It was there I even felt comfortable enough to go for an afternoon run in the park, and realized this was where all the life happened. People dancing, children playing, lovers kissing, people riding bicycles or similarly out for leisurely  jog. Till the sun set, this was life. 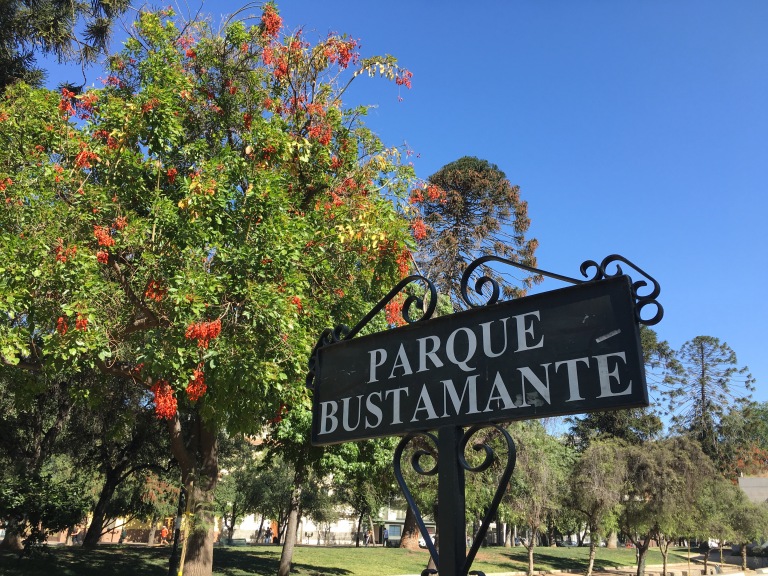 The first evening we went for a walk to the Barrio Bella Vista just over the bridge. There we went for a delicious “dinner” at local brewery. Probably the best beer we’d drank since BBC in Colombia. But I say dinner lightly because to us it was a regular dinner time. But down here, dinner wasn’t eaten until 10pm. We were merely having a late lunch. For actual dinner that evening we went to a restaurant that served a local cuisine. Sat next to us in the tightly packed restaurant was an older couple watching us struggle to read the all Spanish menu out of the corner of their eye. Spanish down here in Chile was tough. Even people we knew with Spanish speaking backgrounds had warned us of the major change in dialect so knew we were going to have a little harder time. We eventually engaged into conversation with the older couple in the best broken Spanish that we could. Of course i had to explain that Cody was not my boyfriend but actually my brother and we asked them what part of town they were from. They asked us about our travels and where we were headed next. The older and proud Chilean man saying we didn’t need to visit Argentina for the wine, and rather that the best wine was made from the Chilean vineyards. We laughed and wished the couple well even as they kindly offered us a ride home. 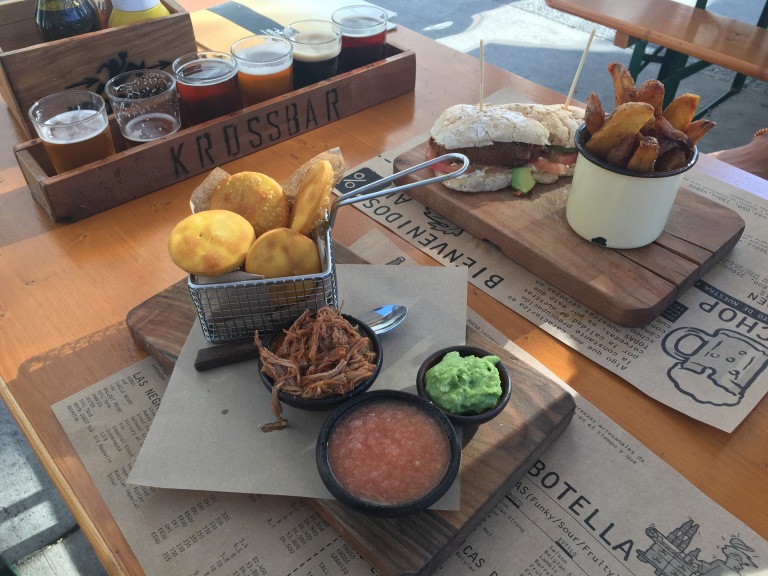 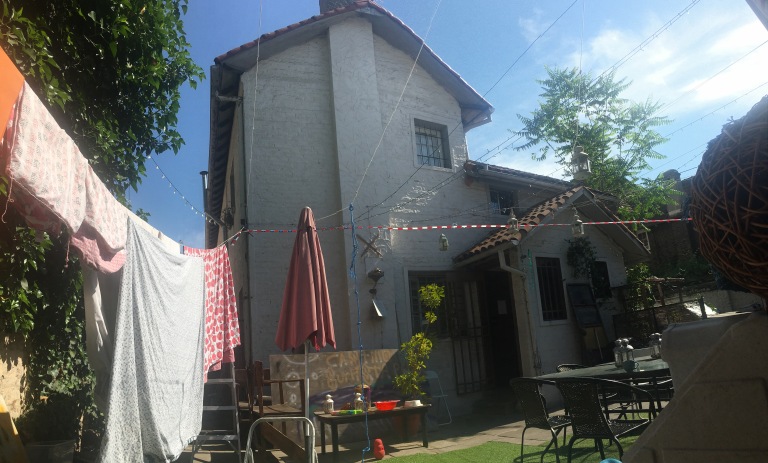 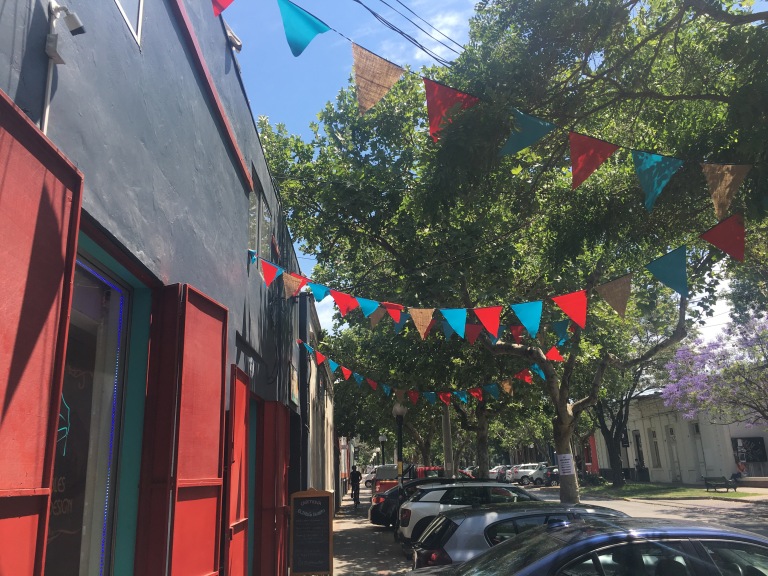 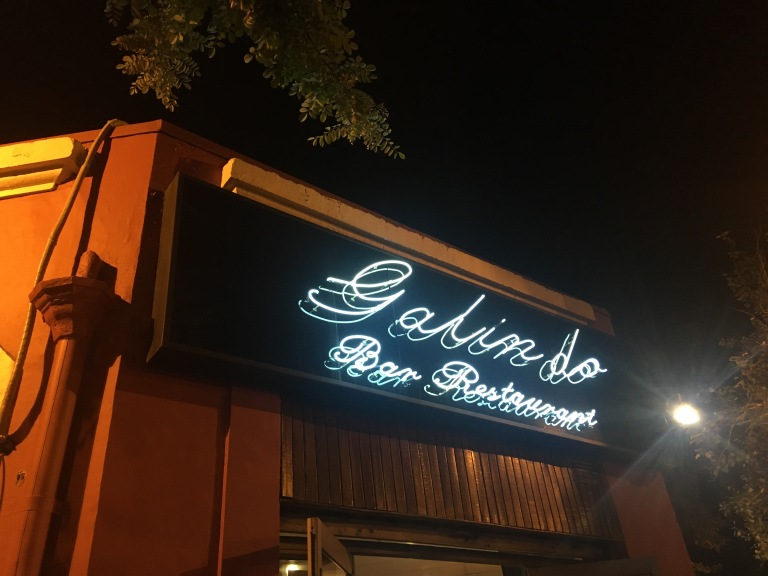 The next morning we hopped on a charter bus and headed to Viña Del Mar for 4k CP each. (Which is actually only around $6USD.) The city itself had a nice underground subway system and an advanced bus system that could take you anywhere down Chile’s two thousand mile long coastline. Lucky for us our travels were more eastern and westerly and would only be a few hours to the coast. The drive in through rolling hills and past one winery after another made me feel like I was in slo again. When we arrived into town at noon there was still a thick marine layer over the city. We settled into our Street Garden Hostel. Viña Del Mar itself means garden by the sea, and that it was as flowers filled the parks and lined the streets. Our colorful hostel boasted a unique design in the common area with trinkets and treasures displayed on every wall. Lucky for us by 2pm the sun had come out and we hopped on a city bus to a town about 8km north called Concon that was supposed to have decent surf. The bus fare was only 780 CP which came out to about $1.20.

The city bus was much slower than the charter, but took you right along the coast. What was wild though were the vast similarities to California. Located almost exactly the same distance from the equator, but opposite to the South, this region of Chile had a similar feel and climate. There were times we would turn a corner and I would feel like I was winding up PCH at home heading from Santa Monica into the winding road through Malibu. And at other times I felt like I was up in Morro Bay, Ca staring out as the green hills that met the sea. Once we arrived in Concon we were greeted with windy conditions on the water and no surf. It was filled with surf shops which Im sure are filled with visitors in the summer, but since we had arrived still in the Spring it was a ghost town. 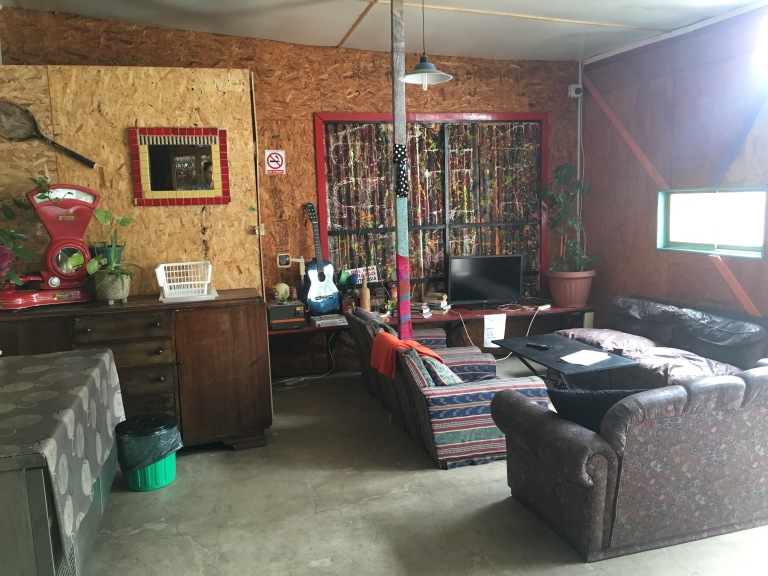 The following morning I woke up early to the clanking of coffee mugs and the small continental breakfast being set up by the host. Bread, jam and hot tea were assembled on a small table ready to consume. It was a relaxing morning just listening to a few other guests talk in Spanish as I stared out the window at the quiet day. We were hopeful again this morning at potentially finding a place to paddle out. Hoping if we left early enough this morning we would get there before the wind, but that wasn’t the case. We arrived in a town called Matiencillo. A place I had seen photos of people enjoying nice lefts in the summer time. The town was also quiet and the only shop open had a familiar signage in the window that read ‘Shaper Studios’. This was a brand based out of Southern California that had just opened shop here in Chile. We went in and talked to the shop keepers about the brand recognition and being from California and decided to rented a couple boards even though the conditions looked awful. I rented a 9ft longboard and Cody a soft top. We were out there maybe 20 minutes as the current and waves thrashed us around. Next thing I know I look up and see Cody heading back into the beach with his soft top bent in half! Guess the flimsy little board couldn’t handle the 200lbs. We headed back up to the shop crossing our fingers we wouldn’t have to pay for damage. Luckily with the California connection and it only being a soft top we were off the hook, and I hurried Cody out the door before the man changed his mind. 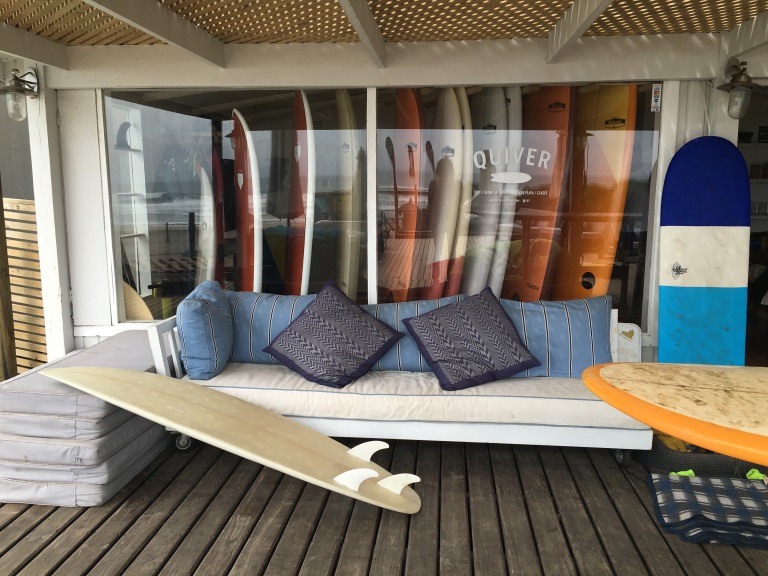 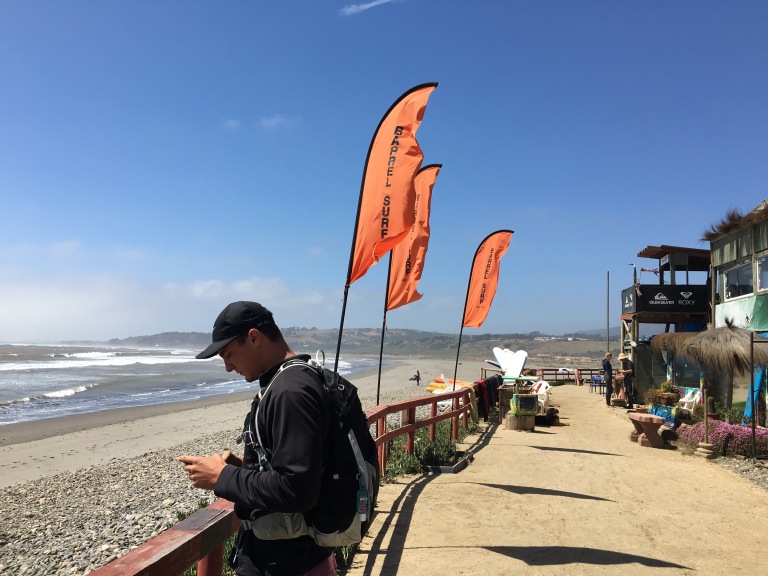 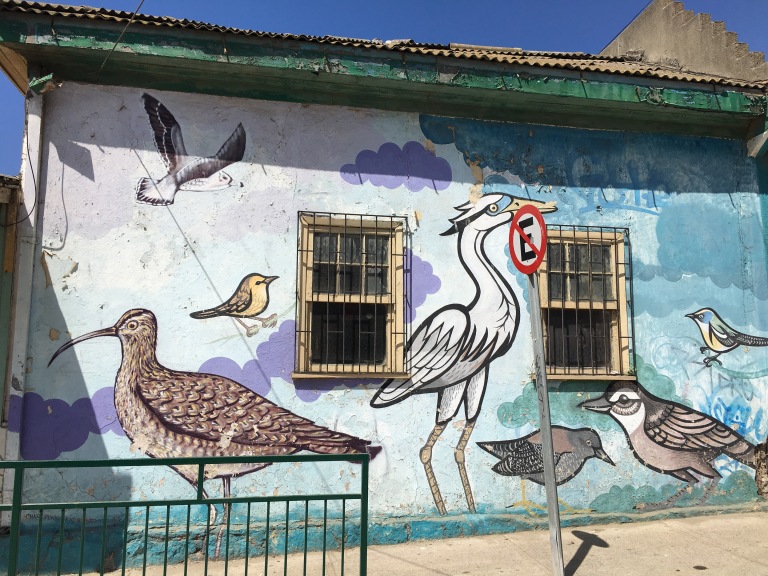 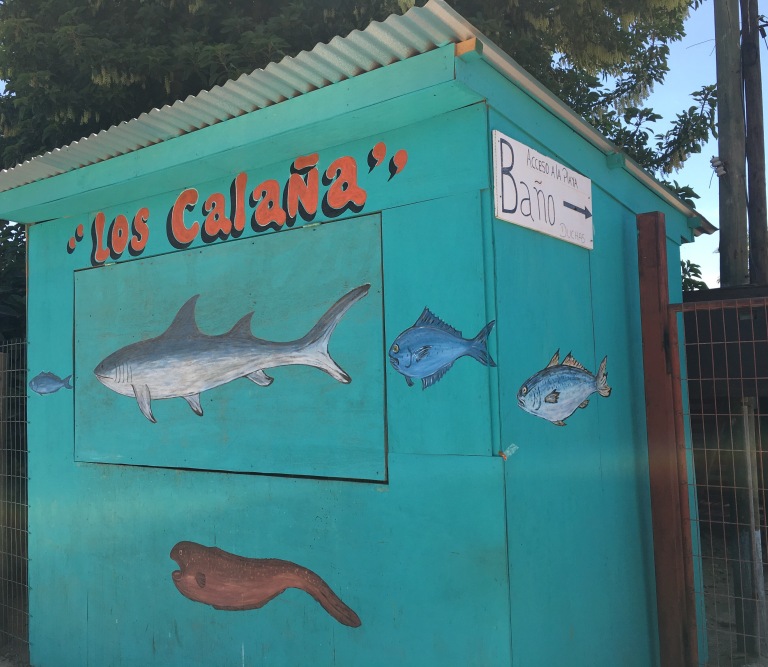 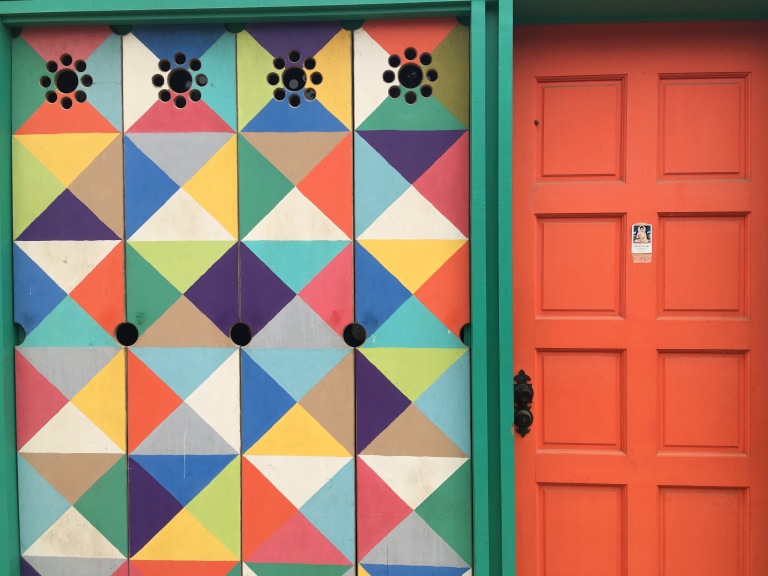 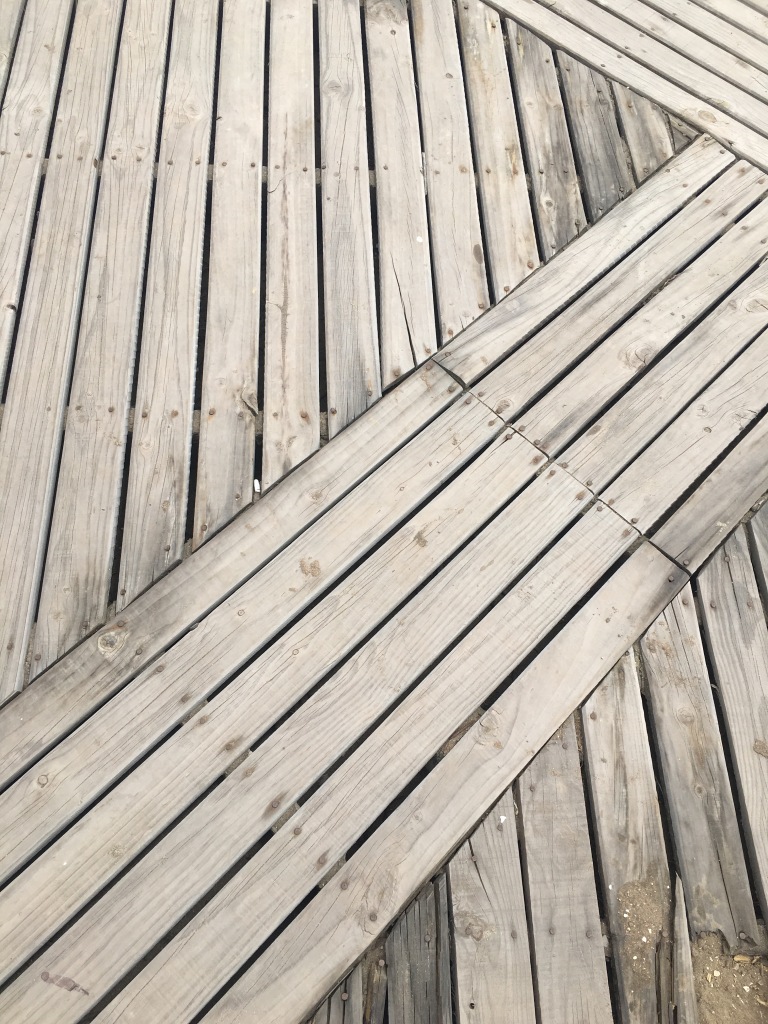 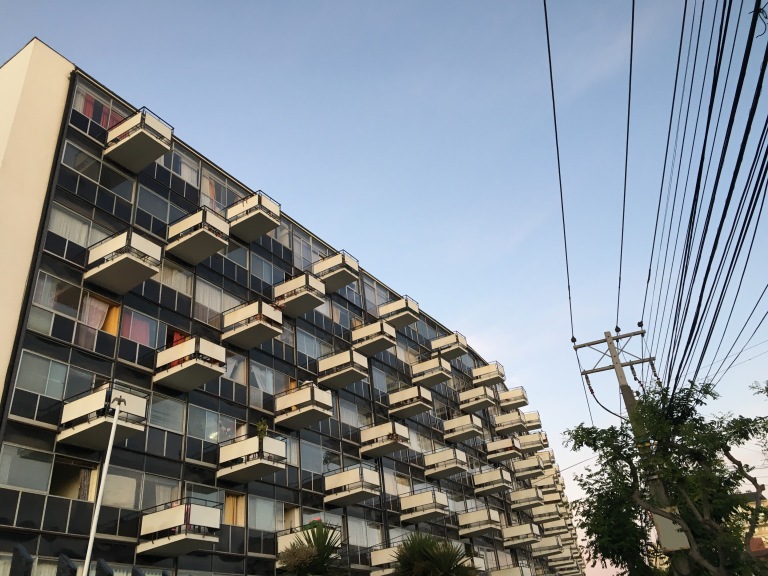 We headed back into town, still early in the day and hopped on the over ground train transit to a port town just south called Valpariso. The towns colorful stairs and winding streets were a host to an array of street art around every corner. Talk about sensory overload. I was stopping every 3ft to take a new photo. It was a graffiti artist dream. We followed the stairs towards the top of the hill where Cody spotted a restaurant with a  balcony that overlooked the city. There we enjoyed a delicious lunch and a few drinks as we took in the view of this rainbow colored city and the coastline. 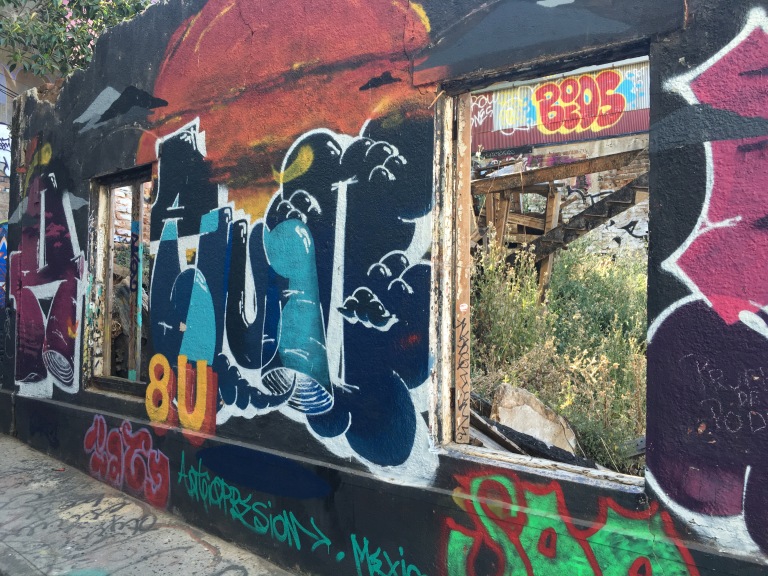 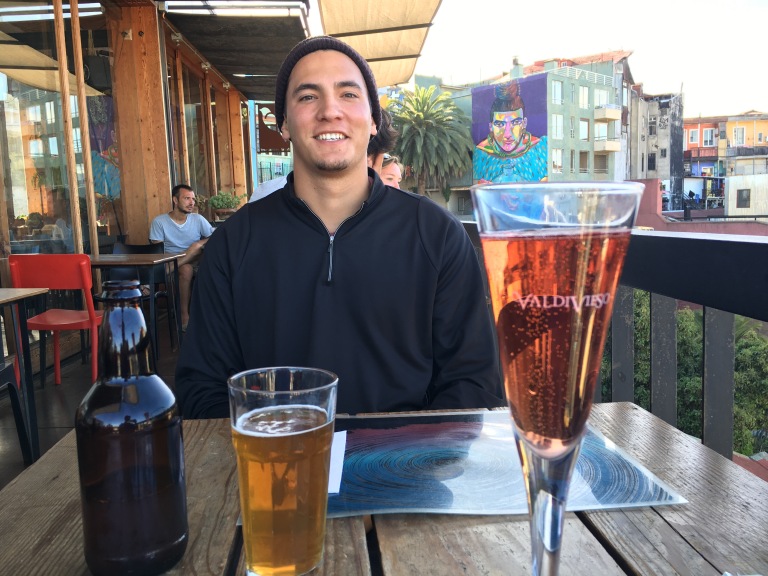 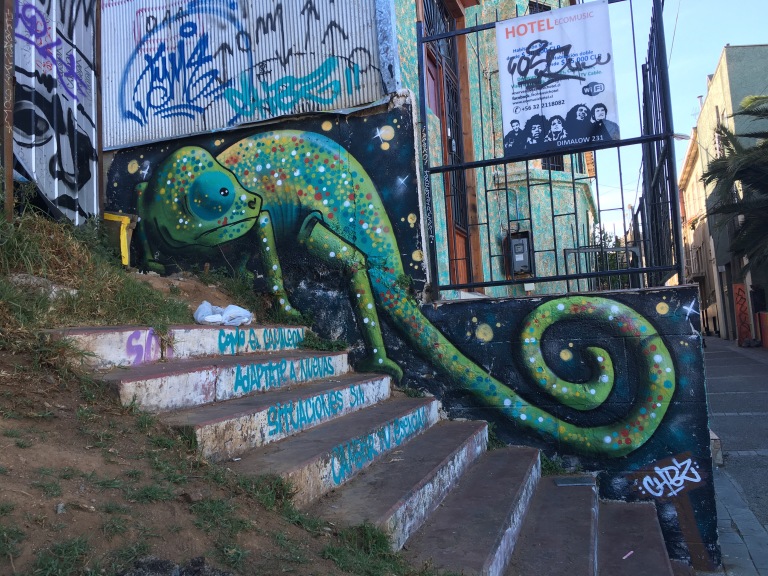 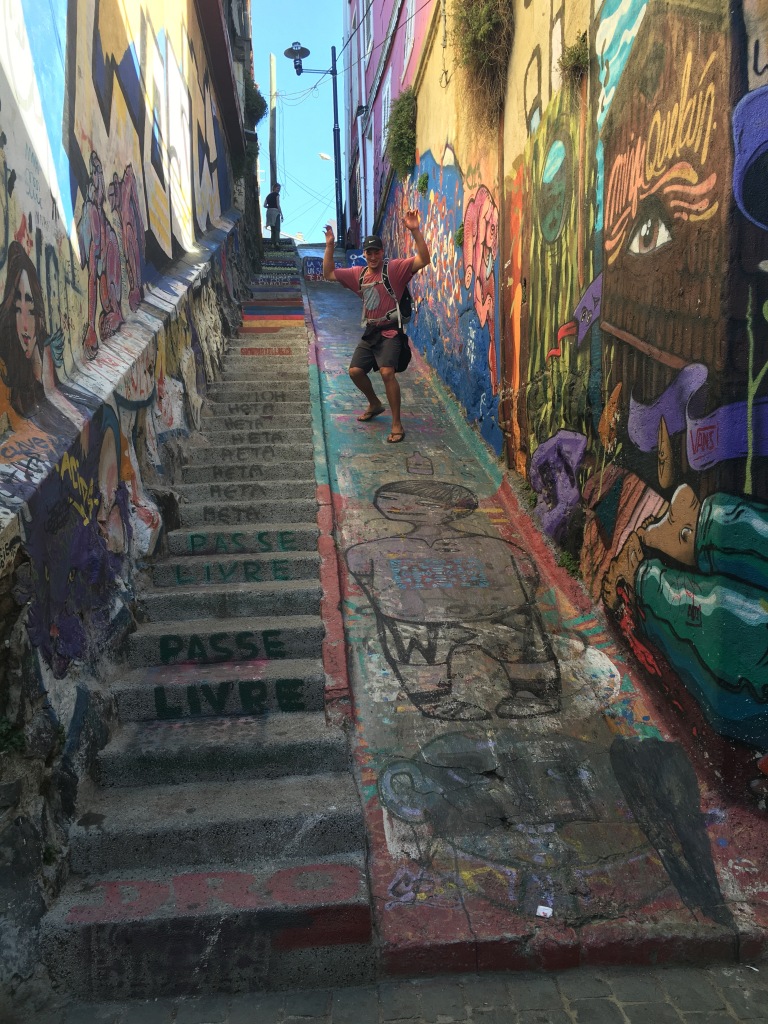 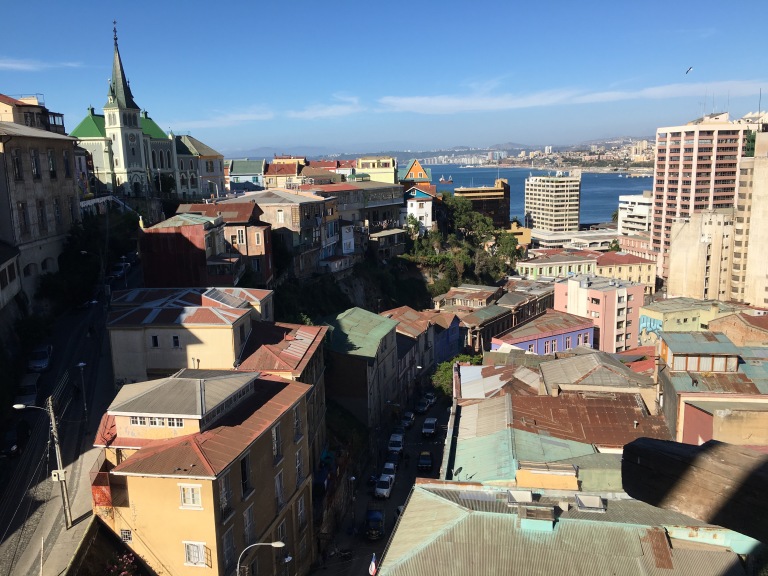