So people we had met throughout our time in Vietnam had told us we didn’t need more than two nights in Ho Chi Minh city. So going into it knowing we had a solid week left in Vietnam we were a little weary. We could have kept heading down the coast and stopped in places like Nha Trang or inland to Da Lat, but the mere thought of an 8 to 12 hour bus ride sounded horrible. So we decided to sit down and make a plan of how we were going to dive in and make the best of the city!

That evening happened to be the night before Thanksgiving. It would be my first Thanksgiving not with family, nor turkey haha. Instead we sat at a table together drinking smoothies and eating Pho mapping out site seeing options for Thanksgiving day. We ended up deciding to visit the War Remnants Museum to get in some culture. The museum was a heavy look into the Vietnam War, which there they call the American war, and basically how the whole world was against the U.S. intervening. In the museum there were images of war, propaganda posters, and a display of the types of giant bullets, guns, grenades and land mines that were scattered across the country. The most disturbing images though were those showing the aftermath of the war and the effects of the Agent Orange chemical and how it has effected up to three generations. The chemical attacks your chromosomes causing crippling genetic birth defects. It was really hard to even look at some of these images without your heart just hurting. What was also scary were the images showing causalities of the many lost land mines that had been triggered as recently as 2003. Made me want to think twice about heading off the beaten path and into the hills… Heavy stuff. 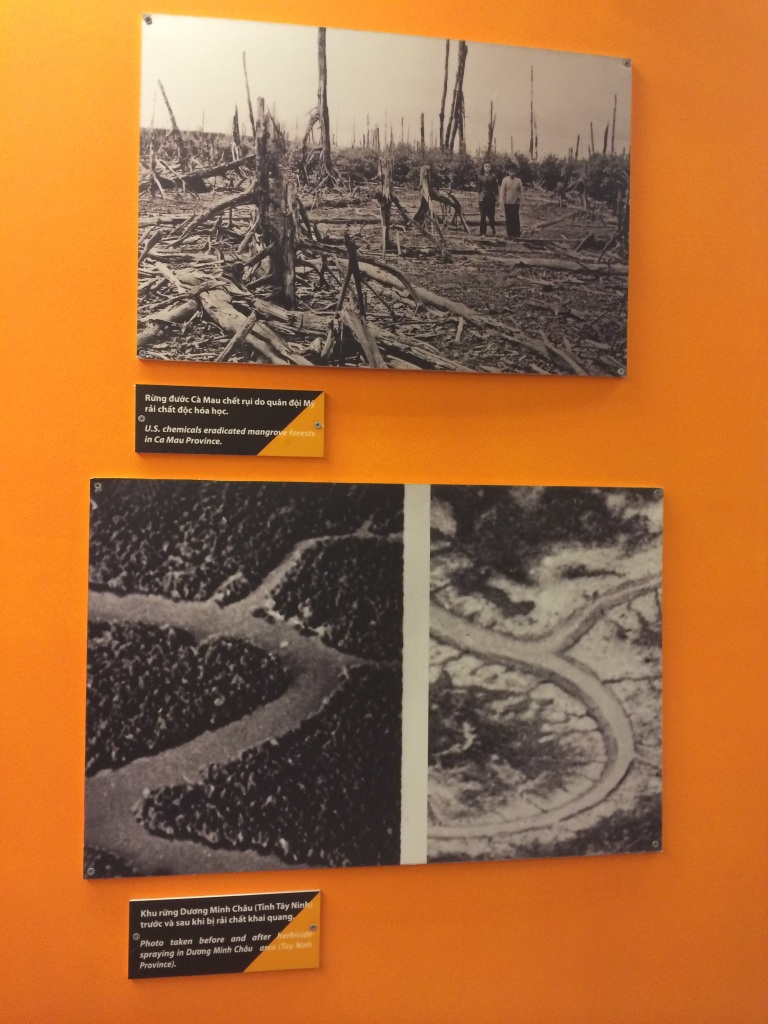 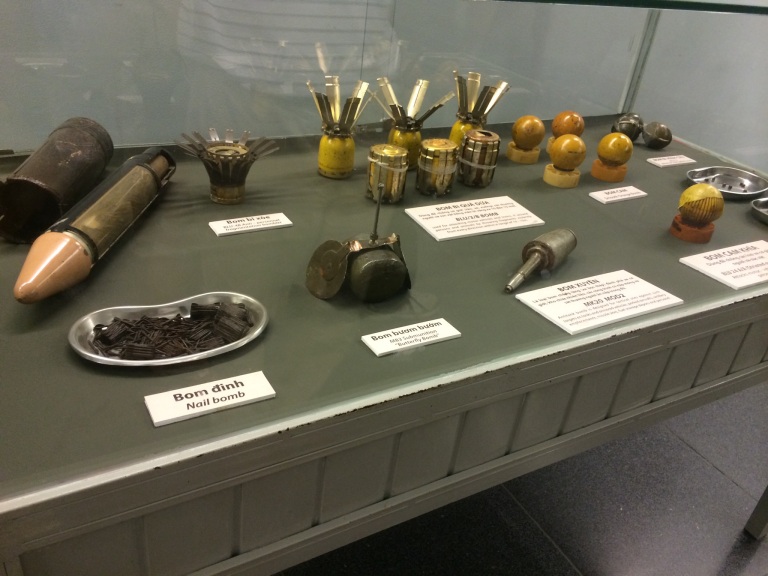 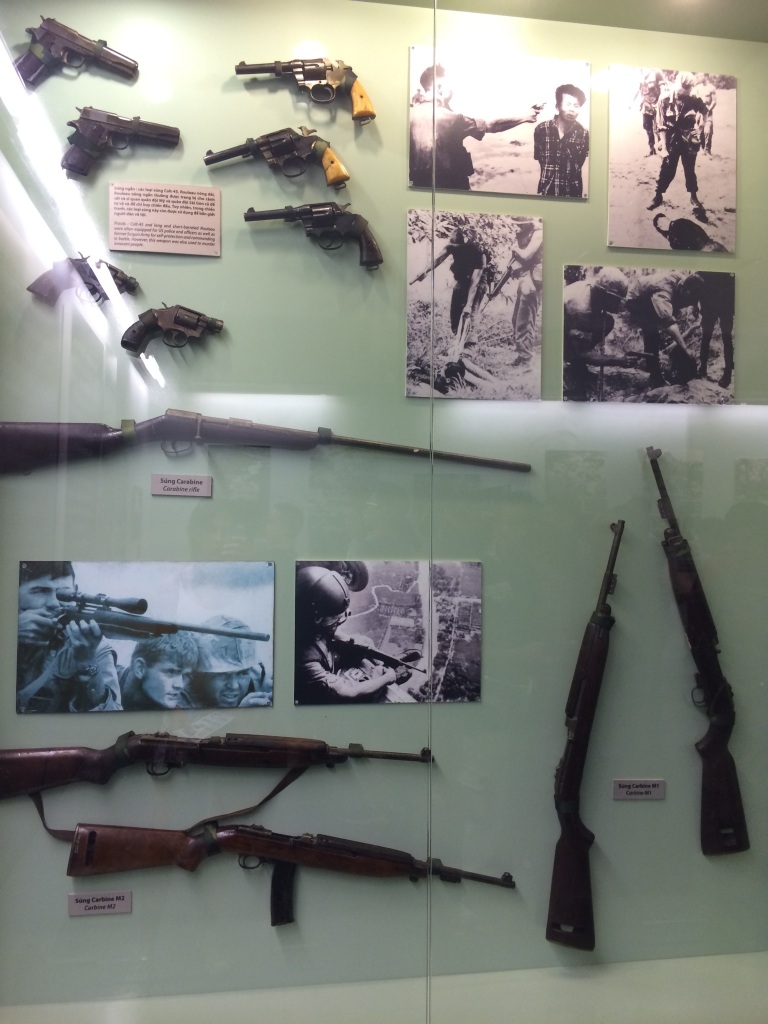 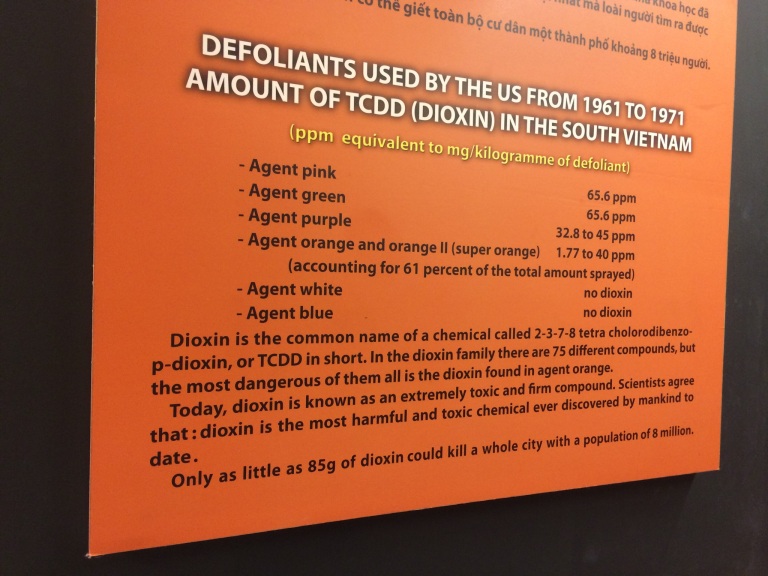 That evening, we walked about peeking in the hectic Ben Thanh Market, and ended up having sushi for Thanksgiving dinner haha. So random! After dinner we found ourselves on a busy street filled with bars. Once again the tiny plastic chairs lined the sidewalks beckoning budget travelers to come and drink their cheap beer and buckets of alcohol. If we couldn’t eat like it was thanksgiving, we could certainly have a few drinks and fall asleep early like it was haha. We chatted with new friends and learned their stories and how they found themselves in Vietnam. I have been amazed in this country to find just how wrong my first impression of many other travelers have been. Guys that looked like true hippies or vagabonds, having pony tails, or looked like they were there just to party, actually held PhDs in their back pocket in Neurology, Psychology, or happened to be brilliant Chemists. Just goes to show you can’t judge a book by it’s cover. It also helped me in justifying that I was wasn’t the only crazy one leaving a perfectly good job and a degree at home for a while. Just because you hold a prestigious degree or a high paying job, doesn’t guarantee happiness. They were all on the quest for something more, or at least spending some time abroad figuring things out between degrees.

The following day we decided to take an hour and half ride outside of the city to a town called My Tho, located along the Mekong Delta. Here there were very few hotels, and the ones we found were pretty dingy. Walking on the street there wasn’t a tourist in sight. Many of the tourists who visited this area did so on giant tour groups and were shepherded from the bus to the boat and back to Saigon all in one day. Reminding ourselves of our mantra, “Are we tourists or travelers!?”, we chose to take a different approach and stay for the night deciding we would figure out a tour on our own.

That afternoon we met Truc, an older Vietnamese man who was sitting in the lobby of our ‘hotel’ who ran tours out of his small boat. He knew the owners here and would sit in their lobby each day in hopes of maybe catching a group that hadn’t already booked a tour. Lucky for him we hadn’t, and he offered to show us around on his small wooden boat for the day for a pretty good deal. So we hopped on, not really knowing what to expect, but hoping for the best. Truc ended up being very talkative and knowledgable about all the activity happening in and around the delta. He pointed out the dozens of boats gathered at the mouth of a small river. Apparently these giant boats were transporting sand that had been drug up from the bottom of the river because it was of different texture and was used for building in the city. The boats were lined up patiently waiting until the tide came in and the water level rose high enough for them to make the slow 10 hour journey to Saigon. Crazy! Truc also told us about the eyes we saw painted on the front of the boats passing by and how they were there for good luck. 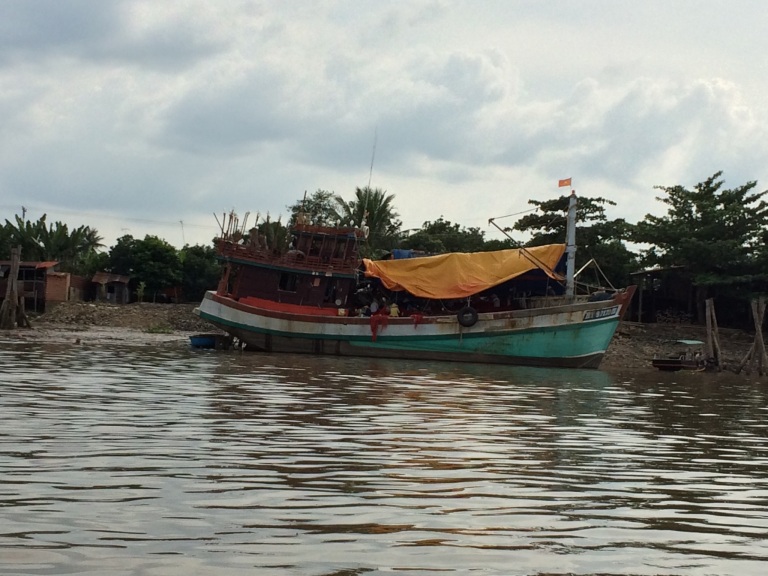 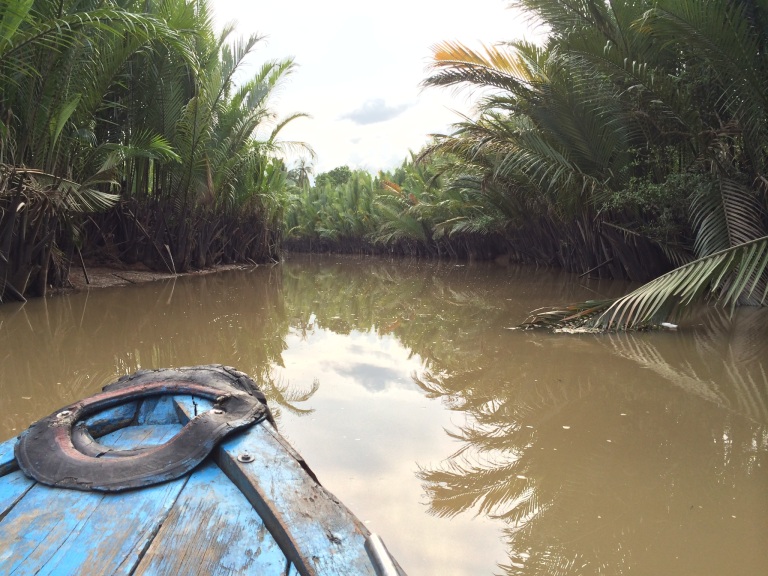 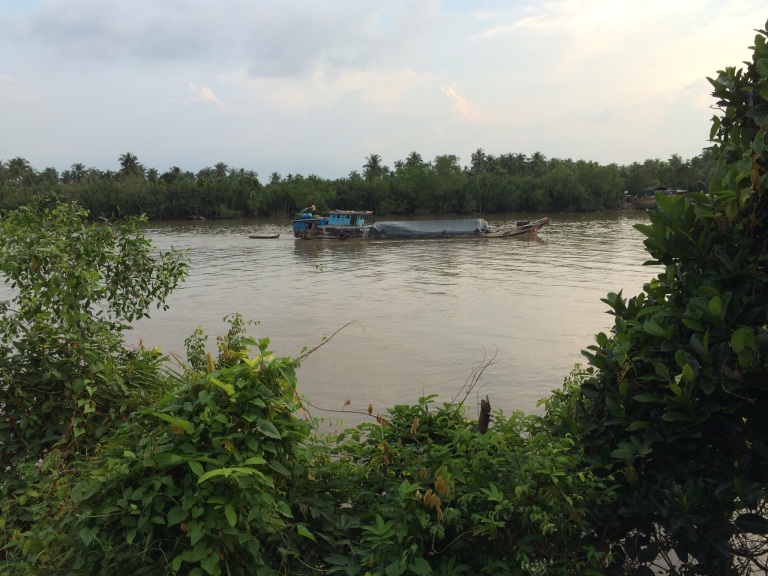 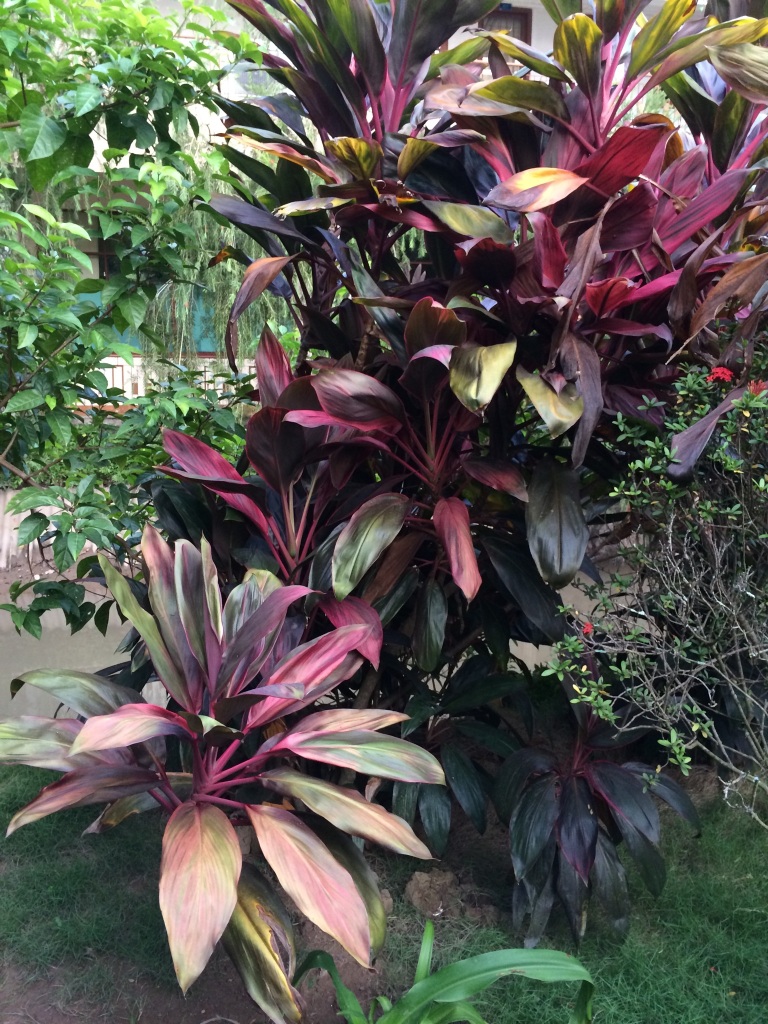 Throughout the day we also got into some deeper talks with Truc and heard a lot about his life story. He never went to school and started shining shoes outside of hotels at age 7. He told us about how he was too young to fight in the American war but served in the war between Vietnam and Cambodia and worked in the hospitals. After all the dust of the war had settled tourism finally began picking up in the 90s when he became a tour guide. Rather than being happy about this change in events, Truc felt tourism wasn’t really helping the everyday people much. He said the government didn’t care about the people and were the only ones benefitting from the money coming in. What it did was create a need for an over abundance of food and over farming of crops that were meant to be planted and harvested only once a year. He said people were struggling for jobs, there was a lot of theft going on, and unemployment was high. He told us how he preferred the country in the time of war because the youth were more eager to stay in school. If you were studying or furthering your education, you wouldn’t be sent off to fight, thus staying alive, and bettering their futures. A thought provoking concept. Needless to say the lunchtime conversation got pretty deep and he ended it with his thoughts on how he felt China was secretly up to something because things had been quiet for so long. His thoughts were that China would be taking over within the next 20 years… a creepy premonition.

The last island we stopped at we got to take a peek into a crocodile farm and try a delicious elephant fish for dinner. We even had a man cutting up the fish and rolling it in rice paper for us right at our table. It was pretty sweet! We ended the evening just after dark so we could see the fireflies light up the trees. Truc pulled the boat over, grabbed a net, caught a handful of them, and put them in a bottle so we could see them up close. He told us how when we he was little they would gather a bunch in bottle and shake it up and use them as a nightlight haha. 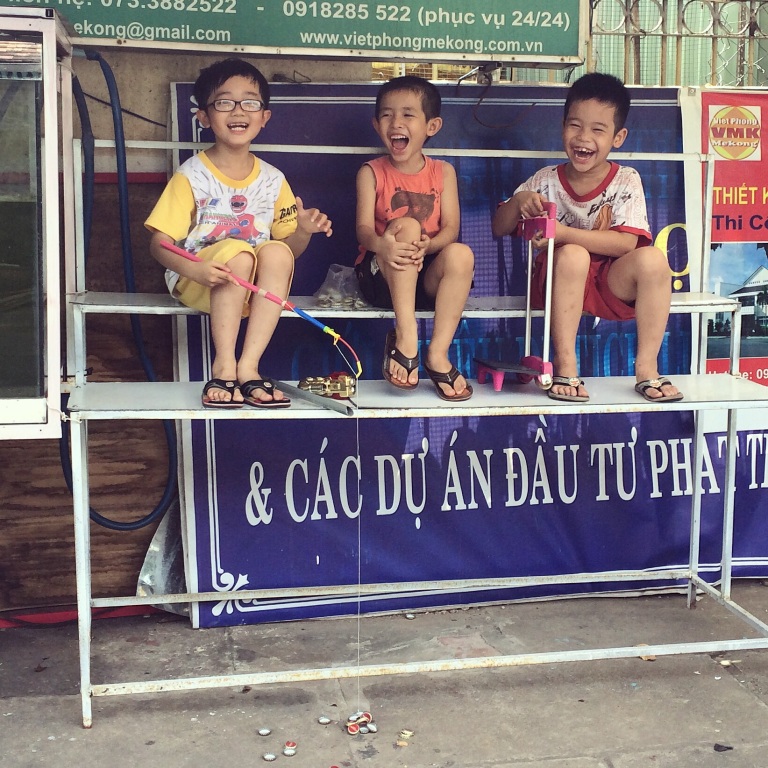 So overall it was a pretty fun and interesting day. We learned a lot and were pleasantly surprised with our little tour. We stayed the rest of the night in My Tho and headed back to Saigon in the morning.

Back in Saigon, the city buzzed with motorbikes. Literally so many you couldn’t even move. It was such a crazy place! We found ourselves looking for escapes from the crazy streets whether it was up above at the sky bar, with a view over looking the lights of the city, or at one of the many Starbucks coffee shops which we nick named “The U.S. embassy” because it was a little slice of home. We started to bring in the Christmas spirit with the taste of Christmas Cookie Lattes and the sound of Michael Bublé. December was here, which meant Christmas was coming, and we were soon headed to Bali! 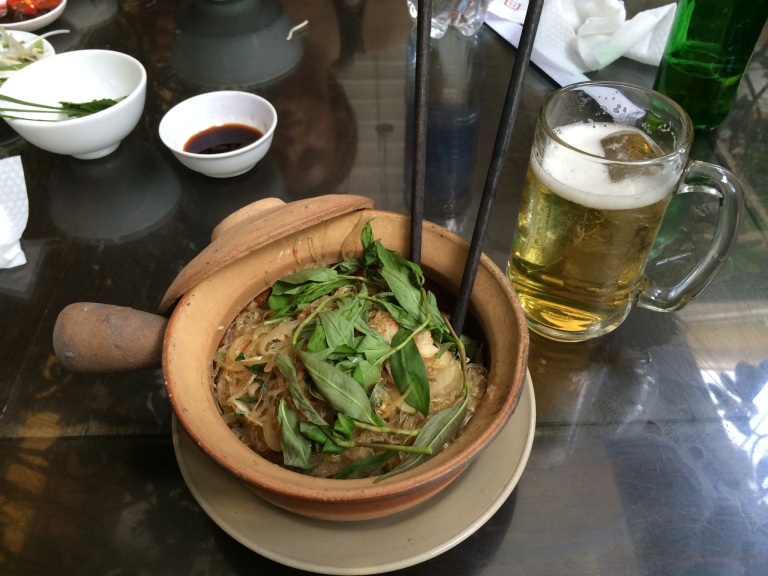 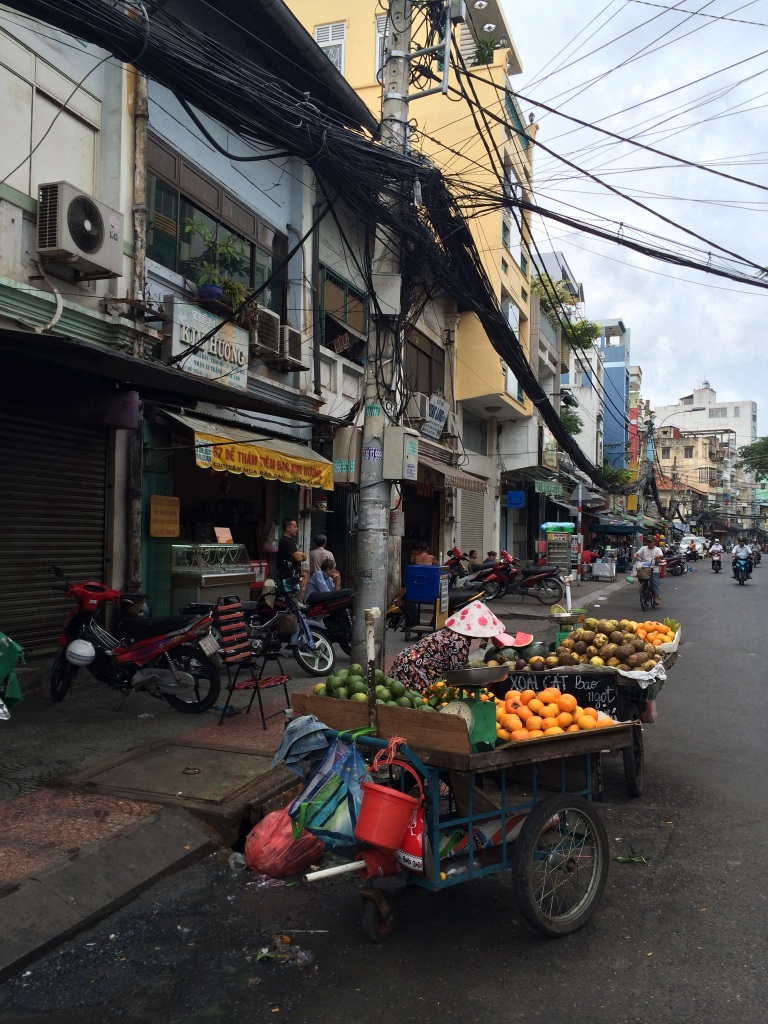