We arrived in Switzerland on Wednesday afternoon after a beautiful train ride along the lakeside and through the alps. Everything was gorgeous here. The crisp air, the mountain tops and the amazing blue rushing water. This water was a blue like I had never seen. Now I know how the powder blue Gatorade glacier flavor got its name haha! Apparently the minerals from the Glacier water turn it this color as it melts and oh my goodness we kept saying it looked like the lazy river or the raft ride at Disneyland as it was rushing outside of our hostel window. Everything about this place was picturesque. Every morning when we sat down to breakfast on the deck you could see the para gliders floating down the mountain side by the dozens. It was amazing. 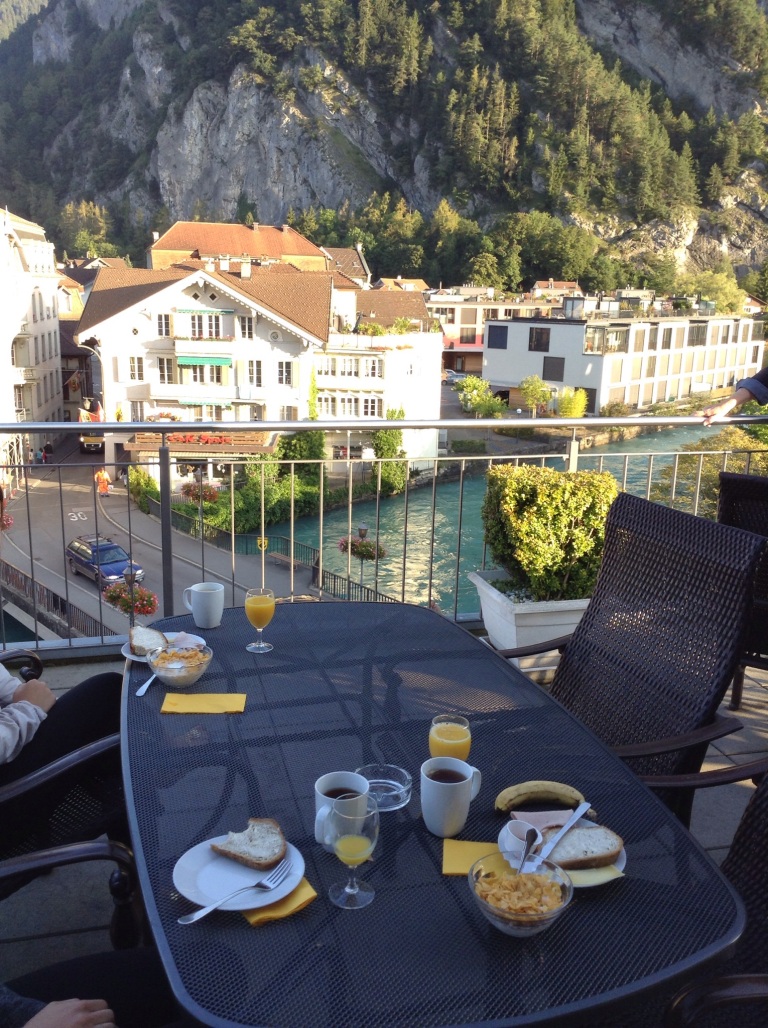 Day 2 we signed up to do canyoning in Grimsel through a company called Alpin Raft! It was about a 45 minute ride outside of Interlaken but a nice little escape into the pass. Throughout the drive our kiwi instructor pointed out the various waterfalls tucked into the mountainsides and the hidden military areas from back in World War II. It was a gorgeous little drive. Once we got to Grimmel we strapped up our helmets which read the names ‘Lost, Lush, and Idiot’ which was so fitting for the 3 of us! The first thing on the tour was a 50 meter rappel into the canyons glacier water. Talk about a wake up call! It was so cold even in our almost 7mm wetsuits and booties. From there we slid down granite rock slides, jumped off rocks, and ziplined through the canyons. It was such an awesome experience and so freeing to just let go and trust these people you barely knew to tie the right knots and tell you to jump in the right spot. Luckily we all made it out without a scratch and just some frozen toes. That night we chose to make soup and grilled cheese for dinner since Switzerland was SO expensive. Literally everything was a minimum 9 franks and most meals were around 20! Luckily the place we were staying had a kitchen so we were able to save a lot making dinner and packing lunches. 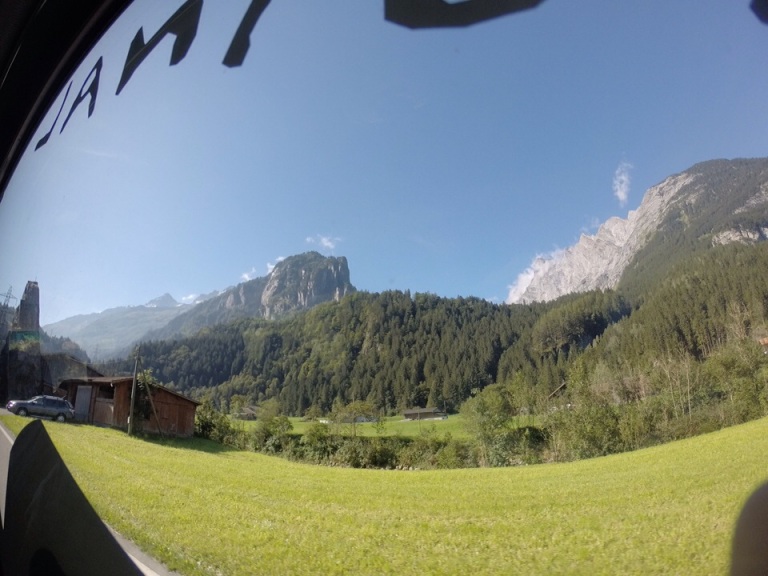 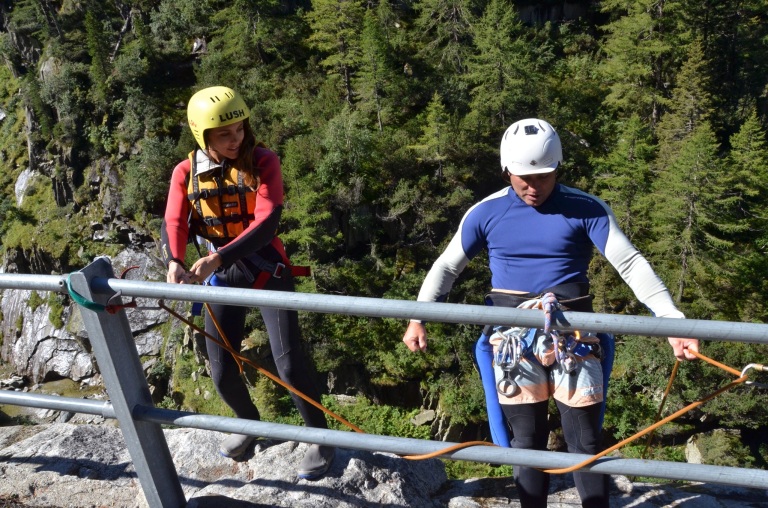 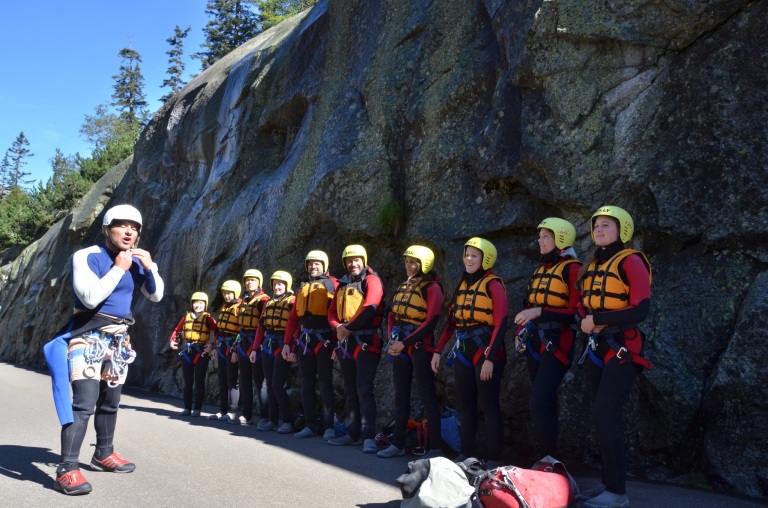 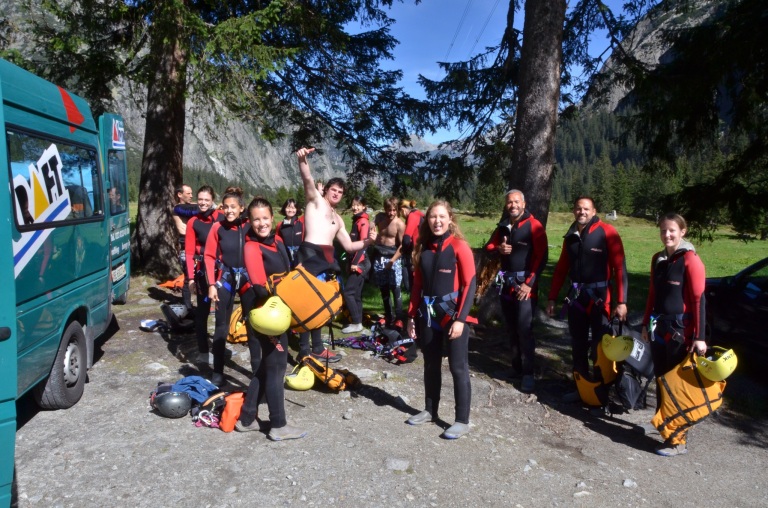 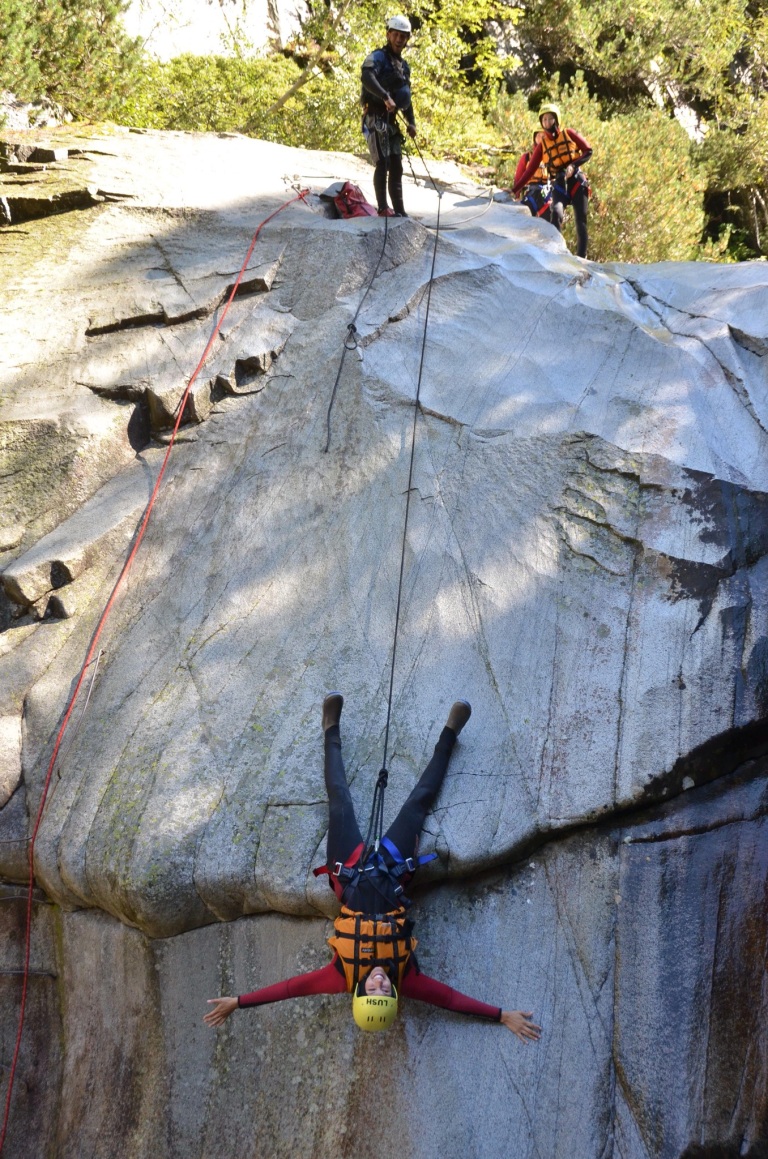 The next day we decided to take a day trip to the little mountain town of Mürren. To get there however, was quite the process. We had to take a bus, train, gondola, and then another train along the mountainside. But once we arrived it was totally worth it. The view of the snowy white mountain tops within the clouds was incredible and just looked like a fake backdrop. After walking around a bit we decided we wanted to have some wine and snacks with our view, but then it started pouring rain! Fortunately we found shelter on a covered cement staircase alongside someone’s home as we sat there and drank our mini wine bottles like hobos. Stoop life was back in full force haha. 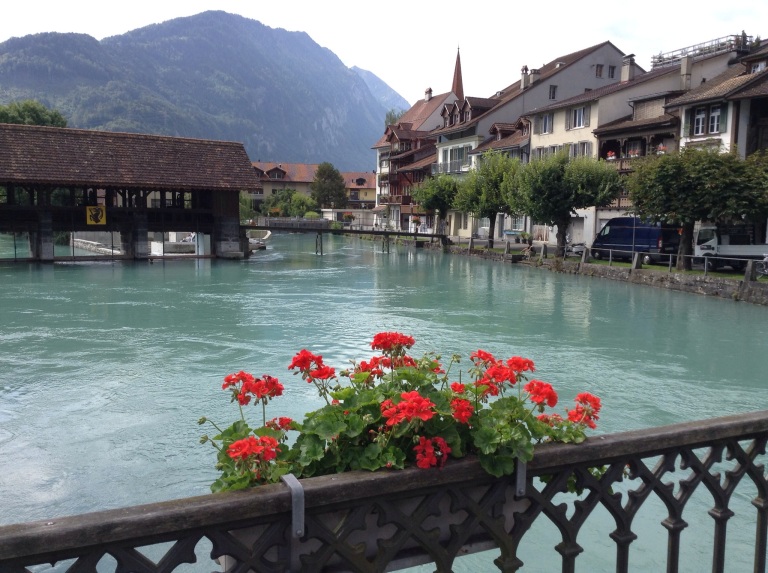 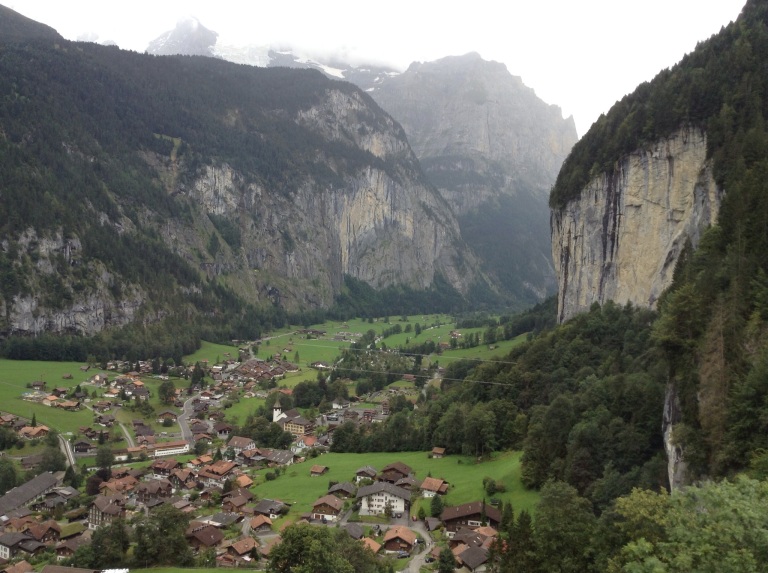 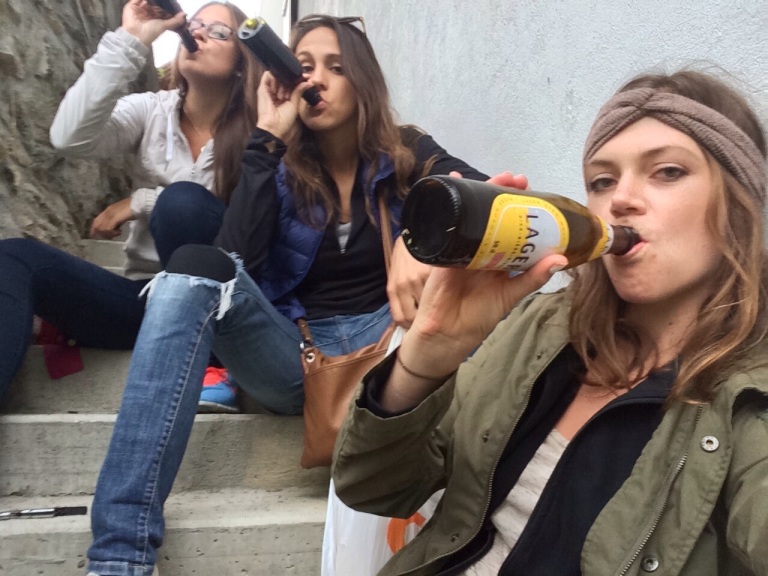 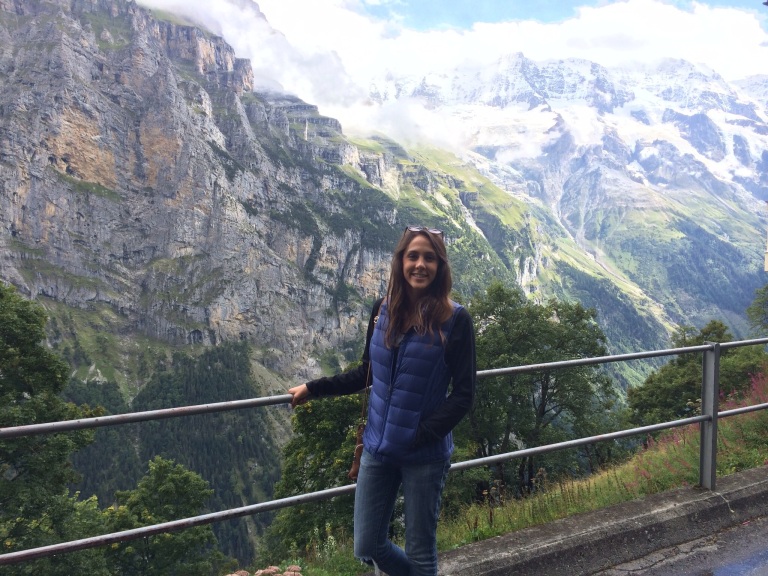 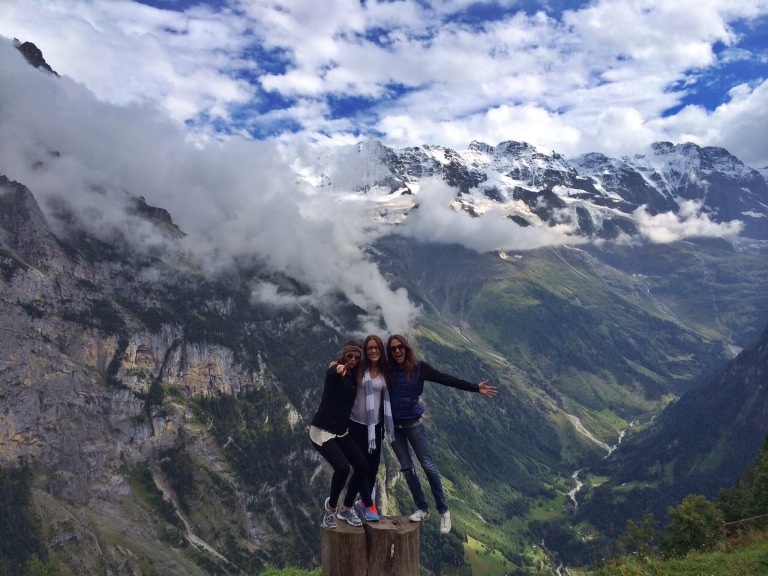 That night since we had only booked 3 nights at the lodge we had to then figure out our next move. Should we stay or should we go? Knowing we had to meet friends on the 9th in the north of Italy we didn’t want to already head to the Cinque Terre so we decided to take a day trip to the capital of Switzerland, Bern, before catching another train to Milan and then possibly a flight to Sicily in the south of Italy…Or so we thought. We spent about 4 or 5 hours in Bern checking out the view of the city from above and napping with our feet in the river. Such a different side of Switzerland seeing a bustling little city full of people on a Sunday afternoon. Before catching our train we waited in the station for a bit trying to bum wifi off Starbucks to book our flights and so I could listen to my brothers football game on the radio. We looked once again like homeless people sitting on the train station floor with our back packs and grocery bags with giant waters and Toblerone that we spent our last couple Franks on. I swear if we would have put a cup out in front of us people would have started to put change in it. But believe it or not, that wasn’t our lowest of lows. To then avoid paying the 2 frank fee of using the bathroom we took turns running onto parked trains to use their bathroom before they took off. Each time we heard the sound of the door closing I felt my heart drop thinking the train took off with one of us on it. Can you imagine? Haha the things we are willing to do to save a couple bucks these days. 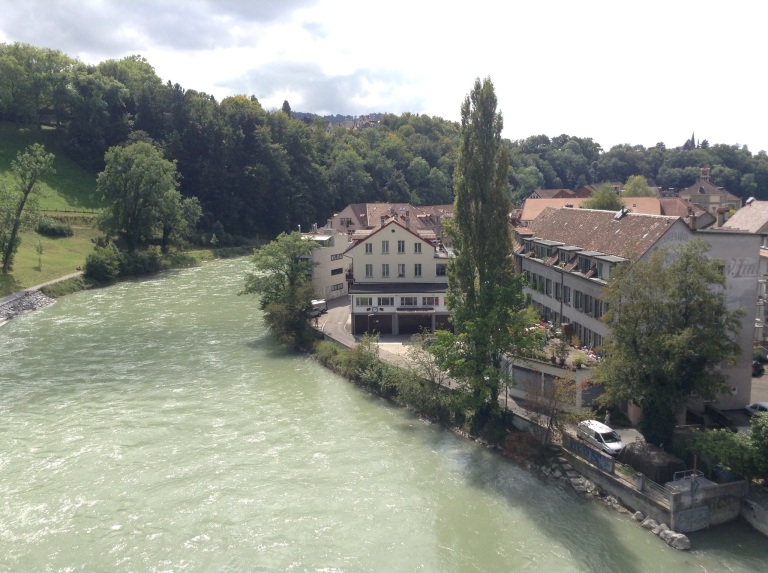 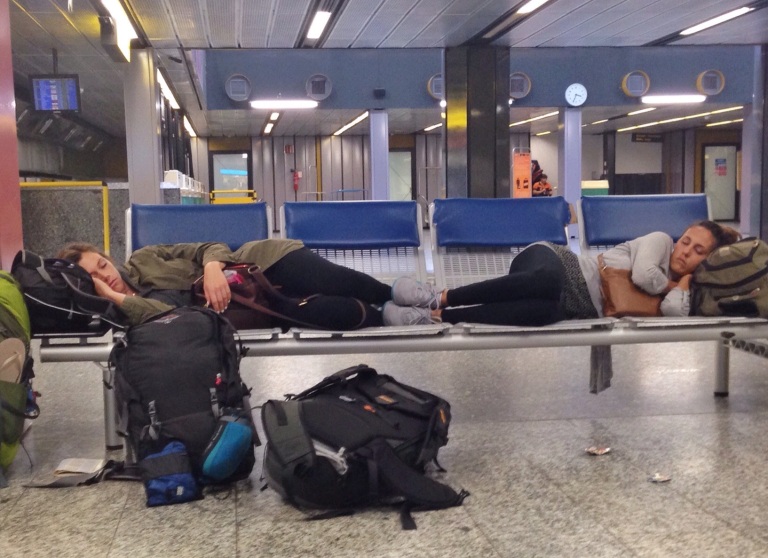 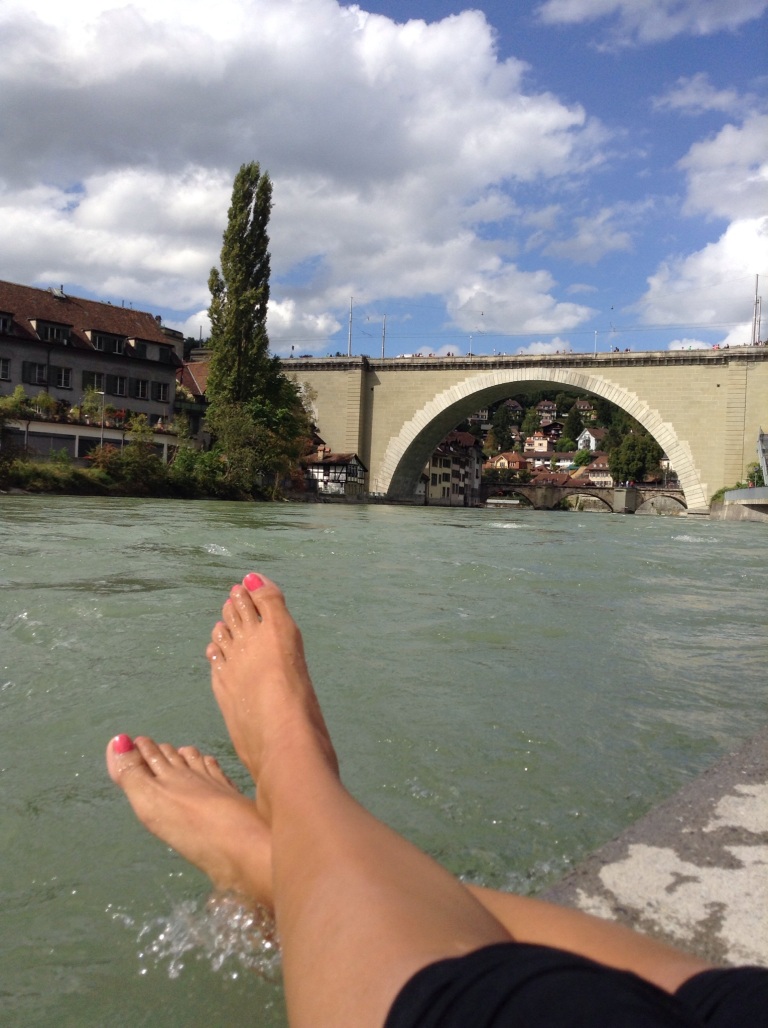 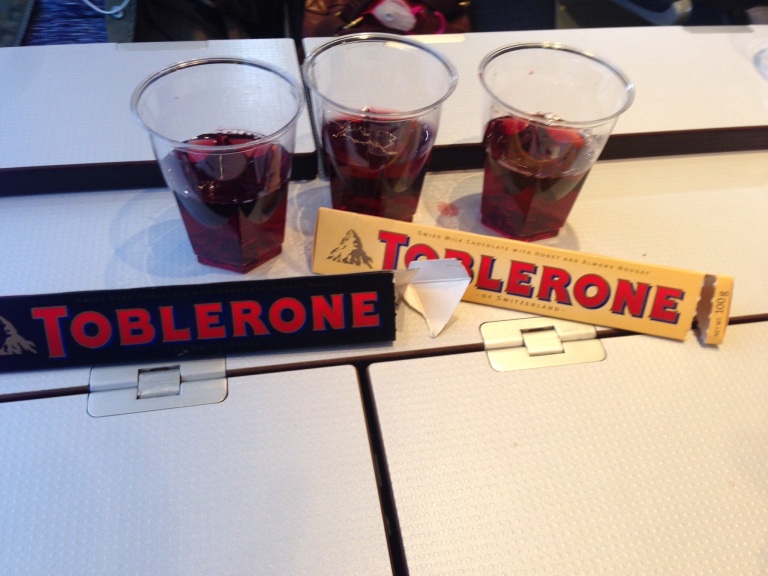 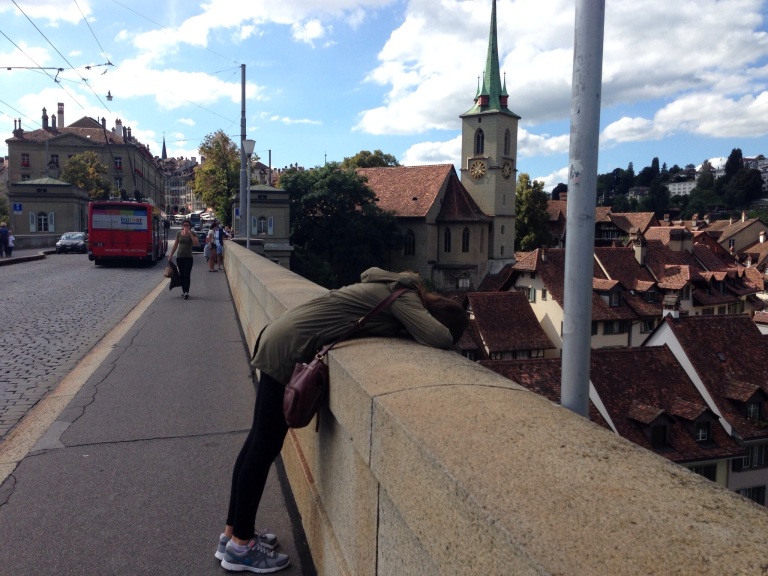 What happened next can be summed up to nothing more than a series of unfortunate events or a giant “it sounded like a good idea at the time”. We got into the Milan station at around 10pm still without a solid plan of what we were going to do. (Mistake #1). We had 2 options, get a place for the night and figure it out in the morning, or head to the airport ate that night and try and get tickets for a flight that took off at 730am the next day. Of course we chose the later, even though the all nighter method had turned out so poorly for us last time… Idiots. Of course once we got there the ticket office was closed and we had to sleep on the cold airport floor until 4am when they reopened. By then it was only a few hours before the flight and therefore they didn’t honor their online prices and were going to charge us an arm and a leg for a 2 hour flight. After shaking our fists that the un helpful Ryan Air ticket agent and wanting to also punch ourselves in the face we decided to come up with a new route… Let’s just go to Greece! And booked ourselves a ticket for later that day. However it was through another airline… At 6pm… At another airport… An hour and a half across town… Awesome right? (Mistake #3) So we had to take another €5 euro bus back to the train station attached with another €10 euro bus ride to the other airport in which we missed the stop for our terminal because we were asleep, go figure, and had to catch another shuttle back. It was now only 930am, moral was low, and we still had 9 hours to kill sleeping on a bench in the clothes from yesterday. Hot mess express. Doesn’t traveling sound glamorous? We seemed to have had a black cloud hanging over us. That or just 3 minds full of poor judgment. We somehow made it through the day living off Burger King and morsels of chocolate from the last train station. Thankfully we made it on our flight and got into Athens around 10pm. A bed never looked so nice. We slept until 2pm the next day (Lord knows we needed it) and didn’t start our day in Athens until around 3pm. Were we crazy? Yes. But somehow alive and kicking and ready to take on country number 8.